Under the terms of the intent agreement, collaboration will focus on increasing the number of visitors to Abu Dhabi from key European markets, including the UK, France and Germany. ADDH is set to inject 100 million euros in FTI Group which will also help expand the firm’s worldwide business outreach and enhance its vertical integration strategy across key tourism segments including: tour operation, destinations management, own content and distribution. FTI Group is currently the third largest tour operator in Europe with multiple owned and operated assets, including 70 hotels. In 2010, the firm established its flagship destination management company Meeting Point Tourism LLC in the UAE.

Mohamed Al Suwaidi, CEO of ADDH, commented: “Our strategic partnership with FTI Group reflects our wider commitment, in alignment with the Abu Dhabi Government, to support the Emirate’s ambition in the tourism sector. The collaboration will not only create many opportunities to enhance Abu Dhabi’s sustainable tourism sector, but it aligns with our mandate to further develop sectors of Abu Dhabi’s non-oil economy.”

“FTI Group is already recognised as a key player in Europe’s tourism industry and with access to a passenger base of more than seven million people, I am confident that our agreement will significantly boost the number of tourists arriving from key European source markets to Abu Dhabi,” Al Suwaidi concluded.

Dietmar Gunz, CEO of FTI Group, said: “As a tour operator with a global footprint and an operational presence in the UAE for almost a decade, we are proud to sign an agreement with ADDH, one of the Emirate’s largest holding companies, to further showcase the best of Abu Dhabi’s expansive tourism offerings to our customers.”

“ADDH is an exciting partner for FTI group given its portfolio of hotels and presence in the exhibition, aviation, culture and media sectors, which will enable us to design a new class of exclusive holiday packages for the ultimate customer experience”, Gunz added.

“Abu Dhabi is an increasingly growing tourism market and has been part of our company’s long-term expansion and consolidation strategy in the region. In the coming months, we will open our first fully serviced offices in Abu Dhabi – a clear indication of our commitment to the UAE capital,” Roula Jouny, CEO of Meeting International Group, concluded.

According to recent data from the Department of Culture and Tourism, Abu Dhabi welcomed close to 3.8 million hotel guests In the first nine months of the year, a 2.9 per cent increase on the same period last year. Reinforcing this upward trajectory, hotel occupancy in Abu Dhabi rose 4% to 69% this year and average length of stay grew by 5.6%, equating to 2.5 nights.

Earlier this year, Abu Dhabi was singled out as one of the most cultural cities in the world in an online list compiled by Skyscanner, the popular travel fare website. 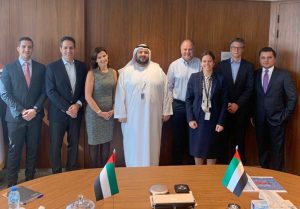 With a clearly defined mandate to generate sustainable financial returns for the Government of Abu Dhabi, ADDH stimulates value creation by developing prominent cluster ecosystems and instilling a culture of performance and efficiency across its portfolio of companies.

In addition to its role as a strategic government partner, ADDH is an asset owner and investor in target sectors, both locally and internationally, which align with Abu Dhabi’s leadership vision.

ADDH is committed to developing a globally competitive Abu Dhabi and operates with world-class standards of governance.

With over 35 years of experience, FTI GROUP is now the third largest travel operator in Europe. Headquartered in Munich, the group employs more than 12,000 employees worldwide and achieved an estimated sales volume of 4.1 billion euros and 6 million customers in the fiscal year 2018/19. The group offers a vertically integrated business model, servicing the client from the start to the end of the journey through its various subsidiaries that include but is not limited to; FTI Touristik, 5vorFlug, a last minute operator 5vorFlug,  driveFTI, a rental car broker,  LAL Sprachreisen, the largest German language tour operator, Meeting Point International, a Global Destination Management Company,  as well as, the umbrella brand Meeting Point Hotels that includes LABRANDA Hotels & Resorts, Design +  Hotels, Kairaba Hotels & Resorts, Club Sei and Lemon & Soul. FTI Cruises bundles the cruise business. Moreover, the group encompasses, other important distribution channels such as sonnenklar.TV, the travel shopping channel and Youtravel the group’s online B2B provider for hotel bookings. The service centre erf24 and Travianet handle bookings from the FTI GROUP and external customers.

Recognizing the significance of the United Arab Emirates to the German market, FTI Group established its flagship DMC in Dubai in February 2010.  Since then, Meeting Point Emirates has developed to be a leading Destination Management Company that welcomed 400,000 customers to the UAE in 2019. To solidify its presence in the UAE, Meeting Point Emirates will establish its first fully serviced offices in the capital Abu Dhabi by December 2019 and will grow its market to half a million tourists to UAE in 2020.  Abu Dhabi is an increasingly growing tourism market and has been part of the company’s long-term expansion and consolidation strategy in the region. The country’s capital has the ingredients necessary to develop and excel in its hospitality sector. We will be focusing on the offering of the destination to visitors from our current source markets and we will be pioneers in establishing an All Experiences destination in Abu Dhabi that boasts world-class hotels, historical sites, expansive luxury attractions such as the Ferrari World Abu Dhabi, Yas Island, Yas waterworld, Louvre Abu Dhabi, Saadiyat Island, Sri Bin Yas Island, Qasr Al Hosn and Emirates Palace. Moreover, a plethora of sea-based activities, growing dining scene, and diverse entertainment offerings are some of what Meeting Point Emirates in collaboration with FTI Group will be packaging to grow the destination and market it to our source markets.