The international hotel group has added a new  resort to its growing group.  KAIRABA Mythos  Palace is MP Hotels 3rd property in Corfu, 8th in Greece and  its 6th KAIRABA branded property.

Munich –MP Hotels has further consolidated its presence in Greece with the opening of KAIRABA Mythos Palace in Corfu. The German hotel group already has two hotels in this increasingly popular Greek island along with an additional 7 in the country.

“We are excited to add yet another fantastic hotel property to our Corfu and Greek portfolio,” said Roula Jouny, CEO of MP Hotels and Chief Content Officer, for  its parent company the Munich-based FTI Group. “KAIRABA Mythos Palace is a unique adults only hotel that will offer guests another standout experience in this Greek island paradise. ”

KAIRABA Mythos Palace is a 276-room, adults only (16+), ultra-all-inclusive beachfront hotel on the southeast coast of Corfu.  The 5-star property  will offer its guests premium accommodation, restaurants, bars and tailor made services. Several plush treatments for complete wellness & relaxation will be available at its onsite la brise spa. The hotel will also house two refreshing outdoor pools, and offers guests direct beach access.

KAIRABA Hotels & Resorts is MP Hotels ultra-all-inclusive 5-star brand. Its “Holistic Holidays” concept, are a promise of a world-class high-end experience in exciting areas that still feel untouched from mass-tourism.  KAIRABA strives to offer guests a premium base from where they can explore Corfu and its magnificent beach-side locations.

“KAIRABA is one of our many exciting brands,” said Jouny. “With the addition of KAIRABA Mythos Palace  we are strengthening this brand concept, which already exists and has been received positively in Corfu and other destinations.”

KAIRABA properties are already operating in Turkey and Oman.  Corfu’s KAIRABA Sandy Villas was the brands second hotel to be opened. The latter celebrates Greece’s ancient history in much of its décor. KAIRABA Mythos Palace does the same in many ways. The hotel is essentially an homage to Corfu’s millennia of Greek, Roman and Byzantine history. Its most impressive ornamental feature being  a series of mosaics. An assortment of non-religious mosaics that is considered the largest of its kind in the world. The collection of 10 mosaics celebrates a series of traits that allowed former empires of the region to successfully carry on for their respective lengths. 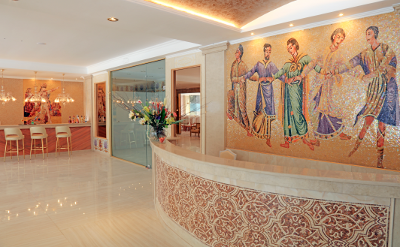 “This is one of the most unique hotel decoration projects we have  been involved in since our founding,” confessed Jouny. “We think our guests will appreciate the effort and in the process appreciate even more the fantastic island of Corfu, and its place in history.”

MP Hotels decision to further expand in Greece comes hand in hand with the country’s uptick in tourism. Greece has experienced a substantial increase in visitors over the years.  According to the Greek Tourism Confederation, receipts between 2012 to 2018  grew by 56 percent. Although numbers are expected to remain positive, but more less level in 2019, the upmarket sector is  showing some particular buoyancy.  For example, according to a report by business advisory group PwC, in 2011 Greece had a total of 108,000 five-star rated visitor beds out of a total of 763,000. Now, Greece has a total tally of a little over 800,000 beds of which 150,000 are rated five-star. This reality showcases that most of the real-growth recorded during this time period is in fact found within the 5-star sector. The latter is precisely the sort of upmarket segment being targeted by MP Hotels with its KAIRABA brand.

“The high-end market has shown an appetite for Greece,” said Jouny. “We are doing what we can to harness it with this move.”

KAIRABA Mythos Palace had its soft opening on September 22, 2019 with tourism professionals, local politicians and journalists who had the opportunity to see the property closely. It was a champagne reception followed by a Byzantine Kaiseki Style dinner. The theme of the event was an homage to Grand Princess Sophia Palaiologina (1455 – 1503), a former resident of Corfu and wife of Tsar Ivan III. 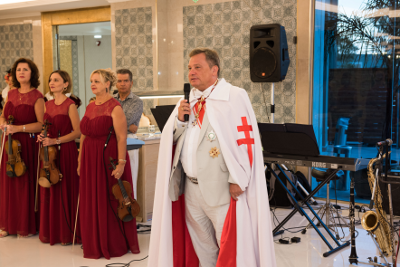 MPI Expands In The Gulf With Bahrain